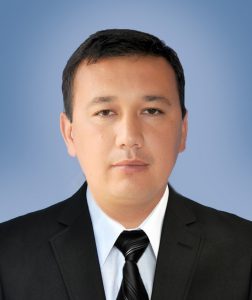 Head of the Chair

Candidate of geological and mineralogical Sciences

History of the chair

The chair of underground mining and mineral exploration, 1952-1953 g in the Central Asian College, but the chair of  Exploitation of mineral resources was organized in the period of creation Mining-metallurgical Institute of Tajikistan.

By the order of the Director of the College from January 2, 2003. Technical chair was divided into two chairs, one of the chairs which was the mining.

After the formation of GMIT on the basis of the Charter, GMIT chair of  Exploitation of mineral deposits was established by decision №1 of the scientific Council of the Institute from 29.10.2006 y. Activities of the Chair based on the Provisions of the Chair of Universities of RT. This Chair is special. The Chair included the following specialties: 510101-Geology and exploration of mineral deposits; 510201-01 open pit mining;510201-02 underground mining. From 2.09.2008 chair subordinates to the mining faculty of the Institute.

In 2009, the structure of the Chair was amended. By order of the rector of the Institute from 5.09.2009 location, specialty 5102 01-03 – enrichment minerals, overseen by the Chair of metallurgy was moved to this Chair.

By 2016, the teaching staff consisted of the number of full-time teachers of which 3 are PhDs, 3- of them are graduate students, 2-of them are conduct scientific research as applicants.

The specialists majoring in 510201-01 open pit mining competence to perform the work on opening of deposits for the study of open cast mining processes implementation process of public works, drainage pits, organization of drilling and blasting in mining, rational use tehnological processes of open cast mining, training of conveyance the location of the rock in dump areas, preparation of surface quarries for system design,separation of development tailings in the ore, the determination of geological resources of the quarry, the choice of drilling machines in mining and geological conditions, the order of execution for drilling operations,the determination of the amount of capacity open cast mining, mechanical crumbling of rocks,hydraulic method development of  rocks,holding the trenches.

The specialists majoring in 510201-02 underground mining competent advice in the selection of system development, mechanization and development organization deposit, transportation and production of ore, auxiliary production processes, mechanical and non-mechanical extraction of ore, blasting, ore mining,hydraulic rock breaking,mounting and demounting of the mine workings, fastening of mine workings,construction of rail tracks for the trolleys movement, repair and restoration of mining,storing and explosives warehouse, labor discipline and safety rules in the mines.

The specialists majoring in 510201-03 enrichment minerals competent advice in the preparation of the ore for enrichment,development of the basic techniques for enrichment, a process of crushing the ore,crushing ore, and classification of rocks,holding a gravity, flotation , magnetic, etc. methods of ore dressing, the choice of auxiliary processes of beneficiation: thickening, filtering, drying and the transportation of food enrichment, preparation of flotation reagents to work in the repair shops and processing factories, control of technological processes of enrichment, control systems, water processing plants, system control air supply to ore preparation plants, control and storage of flotation reagents.

Information about the graduates

Material technical base of the Chair.

In 2014-15, with the support of the administration Institute was lab-created , delivered equipment for the mining production, including the laboratory was set up ”enrichment mineral resource”, where today are the laboratory classes of undergraduate and graduate students.

Currently, the Chair enrolled 18 graduate students first and second courses. The results of the research activities, which are regularly is printed in the materials of Republican and international conferences.

Since the formation of the Chair today, the Chair has been commissioned, print 100 scientific articles, 20 of which are printed in magazines under the President of Tajikistan.

With the aim of implementing scientific achievements in production with “Aprelevka” created branch of the Chair.

Achievements of the Chair.

The patents of invention

The monograph and publications